1983
Rockwell ruled for a fifth week on the R&B chart with “Somebody’s Watching Me”.

1991
Whitney Houston performed “The Star-Spangled Banner” at the Norfolk Naval Air Station for American soldiers returning from the Gulf War. Her recording of the anthem sold more than 750,000 records in only nine days.

1995
Selena was killed by the president of her fan club, Yolanda Saldivar, a lesbian. Saldivar had been fired for embezzlement.

2002
Celine Dion began the first of four weeks at the top of the U.K. Album chart with A New Day Has Come.

2010
Cher’s first child, Chaz Bono, asked a judge to formally change his name and gender following the sex change surgery he had last year. The 41-year-old, who was born Chastity Sun Bono, became Chaz Salvatore according to a petition filed in Los Angeles. Salvatore was his father Sonny Bono’s real first name.

The soundtrack to Wayne’s World was the number 1 album in the US. It featured the return to the charts of Queen‘s, “Bohemian Rhapsody”, actually making the song a bigger hit the second time around

Britney Spears plays a ditzy TV host on the “Buy, Buy Baby” episode of Will & Grace.

The Singing Nun, whose given name was Jeanine Deckers, committed suicide after the center for autistic children in Belgium that she helped to found had closed due to lack of funds. Her 1963 hit “Dominique” went to number one in the US and sold over 1.5 million copies, winning a Grammy Award for the year’s best Gospel song. Even sadder is the fact that she was unaware that on the day of her suicide, the Belgian association that collects royalties for songwriters awarded her $300,000. At the time of her death, she was 52 years old.

1986
Whitney Houston had the top album for the fourth straight week, as the album passed the 52-week mark of release.

Madonna debuted on Broadway in “Speed The Plow.”

A TV ad for Madonna’s new perfume, Truth or Dare, was deemed too racy for ABC network television. Dressed in leotards, fishnets and harnesses, the Material Girl was shown licking her lips while wearing black lingerie and a mask, rolling around on the floor.

2017
After a three month delay, George Michael of Wham! was finally laid to rest in a small, private ceremony, attended only by friends and family. Michael died of natural causes at his home in Goring-on-Thames, Oxfordshire, on Christmas Day, 2016.

March 26, 1975
The movie musical “Tommy,” based on the Who album of that name, premiered in London, starring Who singer Roger Daltrey in the title role, Ann-Margret, Jack Nicholson, Elton John, and Tina Turner.

1995
An opera based on the life of tennis player Martina Navratilova premiered at New York’s Carnegie Hall.

Celine Dion released the album A New Day Has Come. 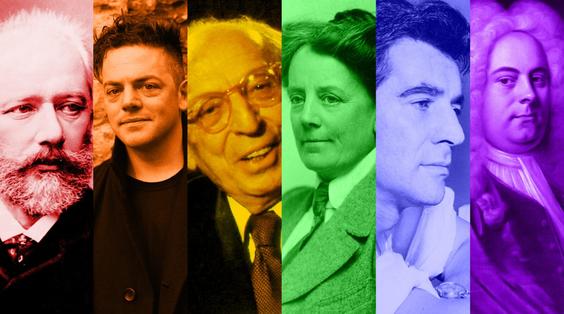 15 Queer Composers You Should Know | WFMTCan you imagine a world without the music of Handel, Tchaikovsky, or Britten? These great composers of the past are just a few of many important musical figures who did not identify as heterosexual. Check out this list of 15 composers, some of whom are still living, and let us know who your favorite queer composers are in the comments …www.wfmt.com

Elton John joined George Michael on stage at London’s Wembley Arena for a duet on the 1974 hit “Don’t Let The Sun Go Down On Me”. The ‘live’ version will be released as a single and would top the charts on both sides of the Atlantic next December. Michael will donate $500,000 from the royalties to various charities.

2016
Gloria Gaynor’s hit ‘I Will Survive’ was selected to enter the US National Recording Registry. It joined Metallica’s Master of Puppets and Mahler’s Symphony No 9 on the list of culturally significant recordings.

Barbra Streisand opened in the Broadway show “I Can Get it For You Wholesale.”

1986
Whitney Houston was on her way–her debut album, which had been out for a full year, was #1 for a third straight week.

1994
Singer, songwriter and producer Dan Hartman died of an AIDS-related brain tumor in Westport, Connecticut. Hartman wrote “Free Ride” while he was with the Edgar Winter Group, had hits “Instant Replay” and “I Can Dream About You”, and collaborated with Tina Turner, Dusty Springfield, Joe Cocker, Bonnie Tyler, Paul Young, James Brown and Steve Winwood.

Britney Spears’ girl-power flick Crossroads earns eight nominations at the 23rd Golden Raspberry Awards, and two wins: Worst Original Song for “I’m Not A Girl, Not Yet A Woman” and Worst Actress for Spears, an honor she shares with Razzie darling Madonna for Swept Away (named Worst Picture). The Material Girl, who has been a regular contender – and five-time Worst Actress winner – since her 1986 win for Shanghai Surprise, earns two more awards. She shares Worst Screen Couple with Adriano Giannini for Swept Away and garners Worst Supporting Actress as Verity in Die Another Day.

After easily passing through the Tennessee House and Senate, the Butler Act was signed into law by Governor Austin Peay, making it a crime for a teacher in a state-supported public school to teach any theory that contradicts the Bible’s account of man’s creation. Six weeks later in Dayton, Tennessee, John T. Scopes was arrested for teaching evolution at Rhea County High School.

In Alabama, more than 3,000 civil rights demonstrators led by the Rev. Dr. Martin Luther King Jr. began a successful march from Selma to Montgomery, the third of three such attempts that month.

March 21, 1976
After a David Bowie concert at the Community War Memorial arena in Rochester, New York, Iggy Pop and David Bowie were involved in a drug bust at their hotel room where the police found 182 grams (a little over 6.4 ounces) of marijuana. The pair spent the rest of the night in the Monroe County Jail and were released at about 7 a.m. on $2,000 bond each; charges later were dropped.

Boy George said in “Women’s World” magazine that he would never marry, settle down, or become a father.

Madonna released her fourth studio album, “Like A Prayer.”

Anne Murray was inducted into the Canadian Music Hall of Fame.

George Michael scored his fifth UK #1 album with “Patience”. After a slow start in the US, the LP would eventually climb to #12.

A lost David Bowie album called “Toy”, which went unreleased since 2001, mysteriously appeared on several file-sharing websites. The collection of mostly re-recorded tracks from Bowie’s early years had been locked in a dispute with Virgin Records.

March 20, 1971
Janis Joplin started a two week run at No.1 on the US singles chart with her version of the Kris Kristofferson and Fred Foster song “Me And Bobby McGee.” Joplin, who was a lover and a friend of Kristofferson’s from the beginning of her career to her death, changed the sex and a few of the lyrics in her cover. Kristofferson states he did not write this song for her, but the song is associated with her – especially, he has said, in the line “Somewhere near Salinas, Lord, I let her slip away.” Joplin died of a drug overdose the year before on 4th October aged 27.

March 20, 1975
Patti Smith and Television begin a 7-week residency at CBGB in New York City. During these shows, Smith refines that songs that later appear on her debut album Horses.

The Go-Go’s were to this point the top self-contained all-girl group of the Rock Era (The Bangles would later pass them.) The Go-Go’s album Beauty and the Beat was ﻿#1﻿ for a third week.

Olivia Newton-John was Physical at ﻿#8﻿ ,

“Simple Life” by Elton John was the ﻿#1﻿ Adult Contemporary song.

Whitney Houston scored her 16th Top 10 song in 20 releases–“I Have Nothing”.

Madonna snags her third Razzie for Worst Actress at the 14th Golden Raspberry Awards. Her first came in 1987 for Shanghai Surprise, and the second followed in 1988 for Who’s That Girl. This time around, it’s her role as Rebecca Carlson in Body Of Evidence that underwhelms the judges.