1893, Canada – Grace Darmond (November 20, 1893 – October 8, 1963) was a Canadian-born American actress from the early 20th century. Although performing in a substantial number of films over roughly 13 years, she was known in Hollywood’s inner circle as the lesbian lover to actress Jean Acker, the first wife of actor Rudolph Valentino. She was also associated, as many struggling actresses of the day were, with the actress Alla Nazimova, who was the former lover to Acker, although it has never been verified that Nazimova and Darmond were ever linked romantically.

1910 – Anna Pauline “Pauli” Murray (November 20, 1910 – July 1, 1985) is born. She was an American civil rights activist, women’s rights activist, lawyer, Episcopal priest, and author. Drawn to the ministry, in 1977 Murray became the first black woman to be ordained as an Episcopal priest and was among the first group of women to become priests in that church. In 1940, Murray sat in the whites-only section of a Virginia bus with a friend, and they were arrested for violating state segregation laws. This incident, and her subsequent involvement with the socialist Workers’ Defense League, led her to pursue her career goal of working as a civil rights lawyer. As a lawyer, Murray argued for civil rights and women’s rights. National Association for the Advancement of Colored People (NAACP) Chief Counsel Thurgood Marshall called Murray’s 1950 book, States’ Laws on Race and Color, the “bible” of the civil rights movement. In 1966 she was a co-founder of the National Organization for Women. Murray struggled in her adult life with issues related to her sexual and gender identity, describing herself as having an “inverted sex instinct”. She described herself as having an “inverted sex instinct” that caused her to behave as a man attracted to women would. She wanted a “monogamous married life”, but one in which she was the man. She had a brief, annulled marriage to a man and several deep relationships with women. In her younger years, she occasionally had passed as a teenage boy. In addition to her legal and advocacy work, Murray published two well-reviewed autobiographies and a volume of poetry. On July 1, 1985 the Rev. Dr. Pauli Murray died of pancreatic cancer in the house she owned with a lifelong friend, Maida Springer Kemp, in Pittsburgh, Pennsylvania. In 2012 the General Convention of the Episcopal Church voted to honor Murray as one of its Holy Women, Holy Men, to be commemorated on July 1, the anniversary of her death, along with fellow writer Harriet Beecher Stowe. In December, 2016, the Pauli Murray Family Home was named as a National Historic Landmark.

1934 – “The Children’s Hour,” a play by Lillian Hellman in which two school teachers are accused of having a lesbian relationship, opens on Broadway to rave reviews and sellout audiences. A largely sympathetic account of two schoolteachers accused of lesbianism by one of their students, the play is loosely based on an actual case in 19th-century Scotland.

.Back in Memphis Elvis and Nick Adams were spotted riding motorcycles. Late at night they attended a private showing of Love Me Tender at the Loew’s State Theater. Apparently Gladys cried at the end of the film, when Elvis’ character died.

On the USA LP Charts “The Sound of Music” Soundtrack was #1 on the Album chart for a second week, #5  Sonny & Cher with Look At Us and Barbra Streisand moved from 39 to 7 with My Name Is Barbra

1975 – Members of the Austin Lesbian Organization and Gay Community Services picketed the Austin-American Statesman for refusing to run ads for gay organizations and running housing and employment ads which specified “no gays.” The paper agreed the next month not to print ads which state “no gays,” and began printing ads from gay and lesbian organizations the following April when the Austin City Council passed a Public Accommodations Ordinance which outlawed discrimination based on sexual orientation.

Elton John’s 23rd career hit was another big one as “Sorry Seems To Be The Hardest Word” moved from 54 to 28 on this date.

On the USA song Charts  Olivia Newton-John (“Heart Attack”) was 3, and Toni Basil moved from 13-7 with “Mickey”,

Sign ‘O the Times, the third movie starring Prince, opened in theaters (it had premiered in Detroit, Michigan on October 29.)

1996 – The Ashland Wisconsin school district agrees to pay former student Jamie Nabozny $900,000 in damages. While he was a student, administrators took no action to alleviate the physical and verbal abuse he suffered because he was gay. The nearly one-million-dollar settlement makes Jamie the first of a long string of students to successfully sue schools and school employees for failing to protect them from horrendous homophobic abuse. Nabozny v. Podlesny, 92 F.3d 446 (7th Cir. 1996) was a case heard in the Circuit regarding the protection of a school student in Ashland, Wisconsin, who had been harassed and bullied by classmates because of his sexual orientation. The plaintiff in the case—Jamie Nabozny—sought damages from school officials for their failure to protect him from the bullying. A jury found that this failure violated Nabozny’s constitutional rights and awarded him $962,000 in damages.

1998 – John Geddes Lawrence and Tyrone Garner of Texas are ordered to pay fines of $125 each after being arrested for having sex in their home. The couple refuse to pay and announce they would challenge the Texas sodomy law. Lawrence v. Texas, 539 U.S. 558 (2003) is a landmark decision by the United States Supreme Court. The Court struck down the sodomy law in Texas in a 6–3 decision and, by extension, invalidated sodomy laws in 13 other states, making same-sex sexual activity legal in every U.S. state and territory. The Court, with a five-justice majority, overturned its previous ruling on the same issue in the 1986 case Bowers v. Hardwick, where it upheld a challenged Georgia statute and did not find a constitutional protection of  sexual privacy.

Madonna’s childhood home in Oakland County Michigan, sold at an auction in just 12 minutes. The house, along with a few items of Rock memorabilia, was purchased for $331,000.

Madonna had the #1 album in the U.K. with Confessions on a Dance Floor.

2008: The Supreme Court of California agrees to hear arguments for a possible overturn of Proposition 8 – which included chickens given better protections but ended ended thousands of same gender marriages by a referendum.

Madonna topped Forbes list of the highest-paid musicians in the world with an estimated $125 million in earnings over the past year. Lady Gaga was second with $80 million

Young Singaporeans are less accepting of family members having same-sex relationships than they are of their friends and colleagues as they apply different values on both groups.

While they apply tolerance on their co-workers, other values such as their notions of morality or the traditional family unit come into play when dealing with a family member.
Read more at https://www.todayonline.com/singapore/stigma-among-factors-why-some-find-it-hard-accept-lgbtq-family-members-today-webinar 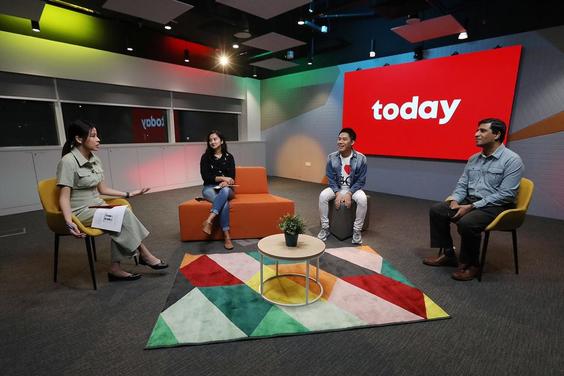 Stigma among factors why some find it hard to accept LGBTQ family members: TODAY webinar panellistsSINGAPORE — Young Singaporeans are less accepting of family members having same-sex relationships than they are of their friends and colleagues as they apply different values on both groups.www.todayonline.com

THE Melbourne Queer Film Festival (MQFF) has been shaken by a row over “pinkwashing” — accusations that the event was promoting Israel’s progressive treatment of sexual minorities as a way of diverting attention from its conflict with the Palestinians.

Activists had called for the cancellation of a screening of an Israeli movie and called for the festival to adopt a Boycott, Divestment, Sanctions (BDS) platform, putting an end to the featuring of Israeli films at the event.

The allegations began earlier this month, with Palestinian activists claiming the festival was seeking to promote “an image of Israel as a queer-friendly idyll, and Palestinians as inherently intolerant and backward people”.

The claim initially stemmed from a screening of Israeli film Sublet as part of MQFF Together, a smaller festival held in March.

“I went through the whole program and [there was] not a single film from Africa or the Swana region,” writer, filmmaker and community organiser Muhib Nabulsi told VICE. “It was then that I noticed that there was this film by Israeli director Eytan Fox, whose films are held up in academic literature, and by activists, as some of the most prominent examples of pinkwashing.” 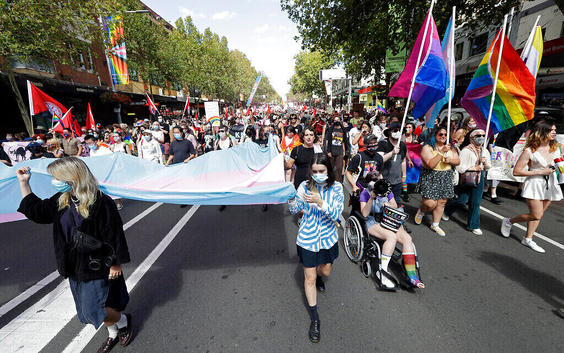 Anger at Israeli movie screening at Melbourne LGBTQ film festival – The Australian Jewish NewsAnti-Defamation Commission: ‘When was the last time you saw a Gay Pride Parade in the West Bank or Gaza? The treatment of gays, women and ethnic minorities in Israel is a thousand times better than in any country in the Middle East.’www.australianjewishnews.com 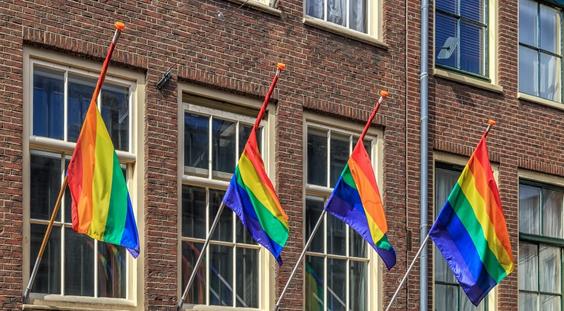 Woman facing hefty fine for making threats at LGBT demonstration | NL TimesThe Public Prosecutors Office (OM) recommended an Amsterdam court impose an 1,100 euro fine, of which 500 euros would be conditional, against a 40-year-old woman. The suspect is accused of hurling insults and threats at people during a protest demonstration against anti-LGBT violence.nltimes.nl

what about hate crimes within LGBT that do not involve heterosexual men? 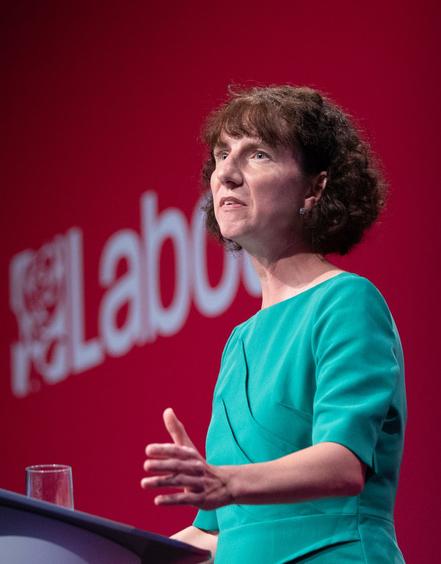