A women’s suffrage bill was rejected by the British House of Commons.

The King of Spain gave authorization for women to attend universities.

Rioting and strikes during International Women’s Day protests in St. Petersburg signaled the beginning of Russia’s “February Revolution,” so named because of Russia’s use of the Julian calendar.

Adrienne Potts, Pat Murphy, Sue Wells and Heather Byers were accused of instigating a “lesbian riot” in 1974 in Toronto pub the Brunswick House.

After getting some aggressive and unwelcome attention from male patrons of the bar, the ladies decided they’d had enough and took to the stage as part of the venue’s open mic night, singing a parody of the Rodgers and Hammerstein classic “I Enjoy Being a Girl”:

“When I see a man who’s sexist/

I just tell him that he can fuck off/

I enjoy being a dyke!

I’ve always been an uppity woman/

I refuse to run — I stand and strike/

And I enjoy being a dyke!” 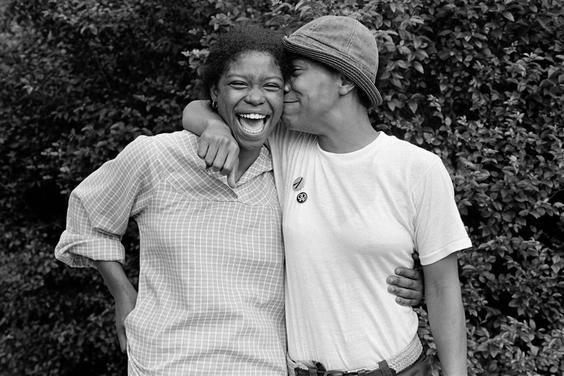 JEB’s Radical Portraits of Lesbian Life and Love in the 1970s | AnOtherThe American photographer’s intimate images – featuring lesbians of all ages, races and backgrounds – are a vital document of LGBTQ+ historywww.anothermag.com

women, including the president Vigdis Finboggadottir did not go to work

it shut the entire country down. 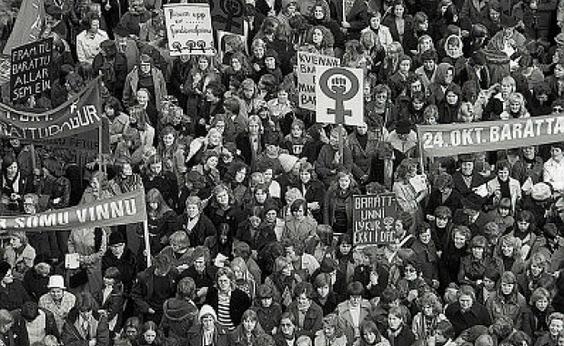 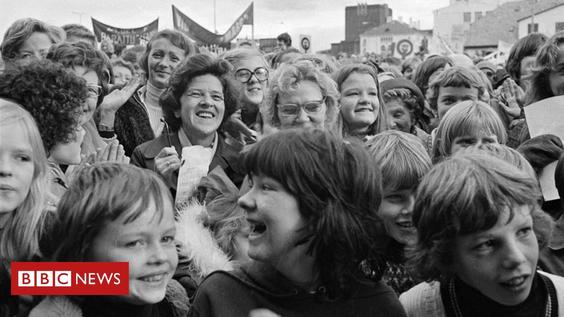 The day Iceland’s women went on strike – BBC NewsIn 1975, the women of Iceland took a “day off” from their usual jobs – and relations between Icelandic men and women were never quite the same again.www.bbc.com

Women’s Day Off – Kvenréttindafélag ÍslandsWomen in Iceland have gone on a strike six times to protest gender inequality and the gender pay gap. On October 24th, 1975, 90% of women in Iceland left work, to demonstrate the importance of women‘s contribution to society. This day was popularly called “kvennafrí”, or Women’s Day Off. In 1985, 25.000 women left their […]kvenrettindafelag.is

Olivia Newton-John‘s “Have You Never Been Mellow” becomes her second Billboard number one record.

then… lesbians helped with the aids crisis….. 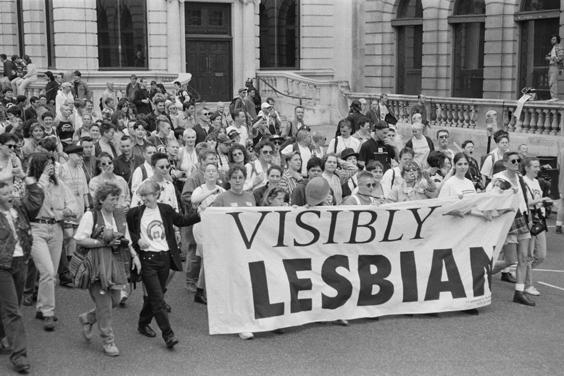 How NOW Started Standing Up for Lesbians | JSTOR DailyIf it had been up to national leaders alone, it might have taken much longer.daily.jstor.org

Cher won the worst dressed female, and worst video for ‘If I Could Turn Back Time’, in The Rolling Stone Magazine’s awards

Annette Funicello revealed that she had multiple sclerosis. She died of the disease in 2013.

The Spice Girls told us what we really, really want–“Wannabe” at #1 for the third week.

China was set to impose stricter rules on foreign pop stars after Bjork caused controversy by shouting “Tibet, Tibet” at a Shanghai concert after a powerful performance of her song Declare Independence. Talk of Tibetan independence was considered taboo in China, which had ruled the territory since 1951. A spokesperson from the culture ministry said Bjork would be banned from performing in China if there was a repeat performance.

A pussyhat is a pink, crafted hat, created in large numbers by thousands of participants involved with the United States 2017 Women’s March. They are the result …

Protest Design: The Origin Story Of The Pussyhat – Bustlewww.bustle.com › protest-design-the-origin-story-of-th..

Jan. 17, 2019 — January 2019 marks the second anniversary of the Women’s March—a protest that arose in response to then U.S. presidential candidate …

Jan. 10, 2018 — The reason: The sentiment that the pink pussyhat excludes and is offensive to transgender women and gender nonbinary people who don’t have …
Stop Wearing Those Pussy Hats To Women’s Marches – Why …www.seventeen.com › life › stop-wearing-pussy-hats-w…

Opinion: Violent misogyny is a threat to half our population …www.theglobeandmail.com › opinion › article-violent-…

Nov. 30, 2019 — The Montreal massacre of 1989 was just one in a long line of mass killings motivated by hatred of women. What would happen, and how many …

Aug. 7, 2020 — … people in the United States has passed a grim milestone. In just … of violence is particularly pronounced for Black and Latina trans women.

Honouring women of the world on International Women’s Day

International Women’s Day: Thousands of women around the world march for equal rights

Meghan, 39, admitted that she was naive at the start of her relationship with Harry and unprepared for the strictures of royal life.

The former television star, who is biracial, said that when she was pregnant with son Archie, there were “concerns and conversations about how dark his skin might be when he’s born.”

Harry confirmed the conversation, saying: “I was a bit shocked.” He said he would not reveal who made the comment, though Winfrey said he told her it was not either of his grandparents, Queen Elizabeth or her husband, Prince Philip.

In the U.S., where Harry and Meghan now live, White House spokesperson Jen Psaki was asked whether President Joe Biden and his wife Jill had any reaction to the interview.

Psaki said Meghan’s decision to speak about her struggles with mental health “takes courage” and “that’s certainly something the president believes in.”

But she said she wouldn’t offer additional comment on the situation “given these are private citizens, sharing their own story and their own struggles.”

https://www.cbc.ca/news/world/harry-meghan-oprah-interview-reaction-1.5940964Boris Johnson, royal watchers react following revealing Harry and Meghan interview | CBC NewsBritain and its royal family absorbed the tremors Monday from a sensational television interview with Prince Harry and Meghan, in which the couple said they encountered racist attitudes and a lack of support that drove the duchess to thoughts of suicide.www.cbc.ca 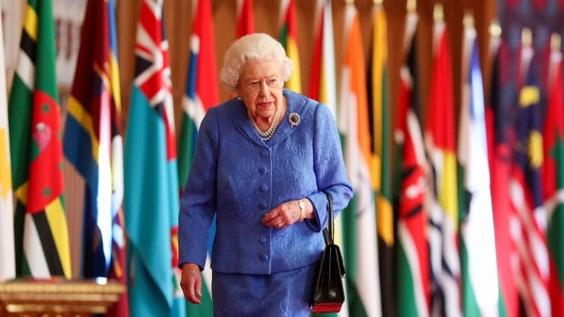 Barbados is severing ties with the Queen. Should Canada follow suit? | CBC RadioJulie Payette’s resignation as governor general has renewed questions about Canada’s connection to the British monarchy. While Barbados has announced their plans to sever ties, experts warn it may be more difficult for Canada to do the same.www.cbc.ca 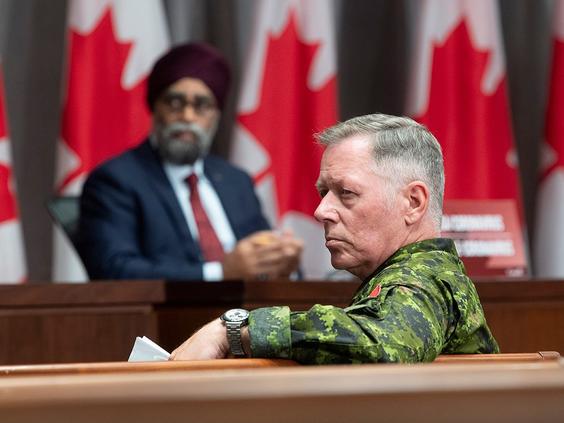 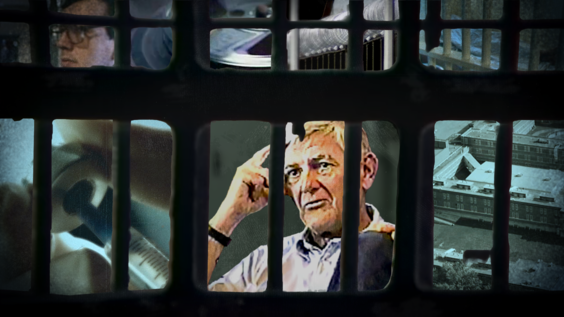 What happens when you turn a psychopath into a therapist? | CBC NewsDr. Elliott T. Barker was a newly minted psychiatrist in the mid-1960s when he came up with a novel treatment for curing psychopaths: Patients would treat patients. New information uncovered by The Fifth Estate reveals that others took that ill-conceived idea one step further, having convicted sex offenders serve as therapists to women with mental illness.Show Morenewsinteractives.cbc.ca