This is gonna cost the NDP. funny how conservatives get away with it, eh

That said; I agree with him, the police caused at worst and failed to prevent at best. a fatal fail either way. 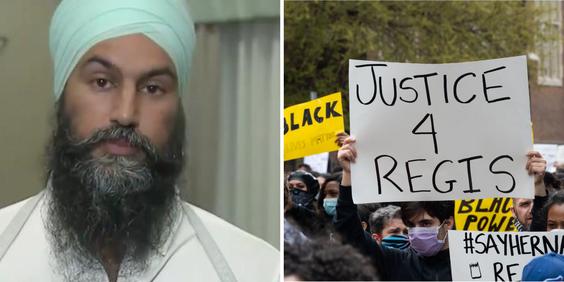 Jagmeet Singh makes false claims about deceased accident victim on Twitter, gets called outNDP party leader Jagmeet Singh made a claim regarding the death of Regis Korchinski-Paquet, stating that she was actually killed by police. Singh’s statement led him to face harsh criticism from all sides, with many denying the veracity of his remarks.thepostmillennial.comShare (1)Emoji

That’s the world of politics for you. At least it’s not as bad as religion.

It’s not our place what people want to do behind doors. It’s not a Canadian pastime. Americans are hooked on who screws who or what religion someone is or isn’t. We Canadians don’t need to bring our standards down to their level. If Americans want to be stupid, let them be stupid. We are Canadians, we need to know better.

indeed. there is the famous quote about the nation not having an interest in the bedrooms of the nations by PM Trudeau 1.0

‘There’s no place for the state in the bedrooms of the nation …www.cbc.ca › player › play

uttering the statement that made him famous. …

‘There’s no place for the state in the bedrooms of the nation‘.

and Alex, had it been up to him, Canada would have had marriage equality in 1985 instead of 2003. an entire generation of exclusion. when AIDs thinned our numbers and we became a market niche and a voter block. queer was not just for celebs, it was everyday ordinary people too. LGBTQ2, eh

One thought on “#DefundThePolice”